Summer steelhead season on the Olympic Peninsula starts in early June and runs through the middle of October. Warm weather, low water, and very few anglers on the water make this season a little hard to believe at times.

Earlier in the season, until about July 15th, the fish are a little harder to find, but a lot more aggressive and as strong as any steelhead anywhere. Later in the season it's common to sight cast to a dozen or more fish a day, but summer steelhead can be picky and selective. 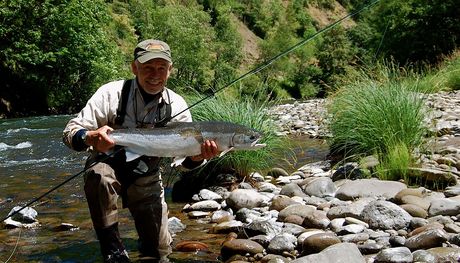 One of the perks of summer run steelhead fishing on the Olympic Peninsula is that there is almost always something else in the river at the same time. Spring Chinook, Sockeye Salmon, Summer Coho salmon and sea run cutthroat, as well as resident rainbows are often found near by.

Dry fly fishing for summer steelhead and trout: Summer steelhead will start eating dry flies as early as June, but if you really want a chance to see some 7 to 12 pound sea run rainbows slurp a dry, the second week of September through the second week of October is the time to come. Plan for a couple of days so we can hit some trout streams and do some salmon fishing while you are here.