Tales From The Trips

We always have an amazing time on our flyfishing trips! Thank YOU! 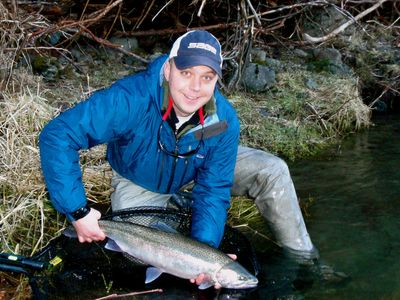 I just wanted to thank you again and let you know that I had a great time on Saturday. It was a pleasure to meet you and to fish with you. I truly appreciate all your patience and instruction and especially your determination and extra time in sticking that second fish. I haven't fished with a lot of guides, but I enjoyed your style. I feel it is not easy to find such a great fly angler who is also an unpretentious, down to earth guy who is actually a great fisherman. 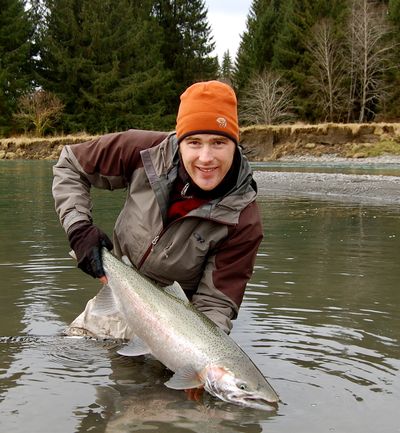 There are guides who will take you fishing; guides who tie the prettiest flies and cast the furthest. But if the measure of guide rests in the quality of one's experience, Jim wins every time. Jim always seems to adopt my agenda as his own-whether it's learning new water, catching steelhead on dries, fine tuning my fishing, or just having a great day on the water; Jim knows where to go and how to do it. He is the undisputed guru of the Olympic Peninsula fly fishing. Weather permitting, I'll be out later this week. 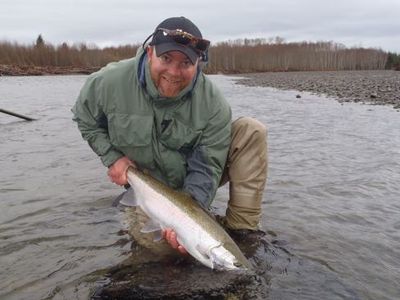 Jim Kerr of Raincoast Olympic Peninsula Steelhead Guiding service is without a doubt the fishiest dude in North America. Such a gnarly angler is he that I named my father, Jim, after him.For real though there's no one I'd rather spend a day on the boat with. Always educational and entertaining.

First, I've fished around a bit and am not usually all that fired about about having to fork over hard earned cash to be guided. That being said, when it comes to wild winter steelhead on the Olympic Peninsula, I like to say, "it pays to pay". While the OP is without a doubt an awesome steelhead fishery, it can also be a finicky SOB. The rivers can change so fast. It takes someone with years and years of experience to understand the nuances of that water. Jimmy has definitely paid his dues and I have really enjoyed the days I've spent in his boat.

I'll give you an example of the type of guy he is. One morning after a major downpour (it is Fork, WA) all the guides were canceling their trips including ours. C and I were out from Wyoming and really didn't want a day twiddling our thumbs. We discussed options with Jimmy and with none very promising, went ahead and grabbed another guide who had also cancelled, two rafts, and went on an adventure. It was one of the most enjoyable days you could ask for. I am 99% sure we were the only ones in the area to get into fish that day. Jim could have easily just said screw it and pulled the plug like everyone else, but didn't. We had to beg a little, but I'll always appreciate his effort that day.

So, I'll be looking forward to catching up with Jimmy next spring to hear about your the elk hunt, the salmon runs, and hopefully, how fun it is to change diapers. 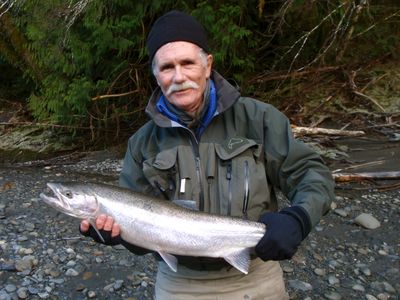 Fishing with Jim is one of the most enjoyable experiences that I treat myself to every year. I've never had a day on the river with him when I didn't catch fish, but the whole experience is so professional and plain fun, that I doubt I would notice.

I've been steelheading for thirty years, so when I want to advance to a new level, I call Kerr, and it's like going to grad school. But when I wanted my son to get introduced to the challenge of winter fish on a fly, Jim simplified the process so comfortably that he caught a fish his first day, and yet was not discouraged by the several he missed.

I worked in outdoor recreation services half of my life, and Raincoast is simply one of the true class acts I've come across. I always feel like family, and he lets me smoke cigars. 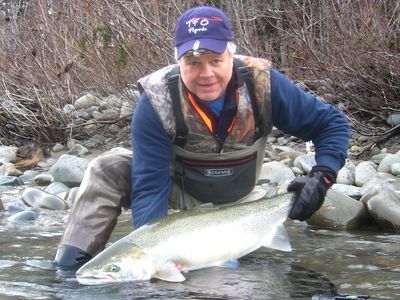 I have had a dream to catch a 20 pound steelhead on the fly rod for many years. I got the opportunity to have you as my guide for a fly fishing trip in February, 2011. Just by chance, too. You just happened to have a seat open up and I was able to take advantage of it.

Very cold weather, snow the night before, high, but fishable rivers. You lead me to a river that does not get heavy traffic due to what is considered dangerous conditions.... Well, as I hooked my first fish of the day, you said "you are probably gonna lose this fish, you could not have picked a worse place to hook a fish". We were at the head of "Hell's Half Mile". As you jumped out of the raft and maneuvered it and pulled it over and around boulders and as I tried to manage the fish the best I could, you were able to get us to a spot where I could play the fish and we actually were able to bring the 12 pound wild buck to the net. Simply amazing, I still replay that turn of events through my mind. Fantastic! I am still fired up about that.

Then later that day, you lead me to the biggest steelhead of my life, a mammoth wild buck of 17 pounds. I am still jacked up about that. Everyone I know has seen those pictures...In two days, you guided me to 11 hook ups and we were able to bring 6 of those to the net. This was the absolute best steelhead fishing trip of my life.

I still seek that 20 pound steelhead, but you helped me get ever so close. I will be back, Jim. I can't wait until next year.

Kevin and I had a great time hitting the rivers with you on Tuesday and finding some steelhead. Kevin is a man of many complaints, but he had nothing but praise after the Jim Kerr experience. I really appreciated the hard work and time you put in for us to make contact with some steelhead on a high water day. Most guides don't expend the energy to row back upstream to give the client a second shot at quality water. Seeing the upper Sol Duc and upper Calawah was a major plus for me. I hope your video project to capture the ridiculous drift netting on the Quillayute will shame those guys into backing off on the wild steelhead slaughter.

Definitely keep me in mind if you have an opening, my schedule is usually fairly open. I'm very interested in going for a chinook (fall or springer on the fly) on the Sol Duc and Hoh, because it sounds so challenging. Also I would be interested in doing a float in late summer or early fall for a mixture of steelhead and cutthroat.

I love to fly fish on the Olympic Coast and Jim is one of my all-timefavorite guides. Fly fishing for steelhead is not an easy task, and anytime I have been out with Jim I feel as though I could fall out of the boat and land on one.

You learn something new every time you go out from a better mending technique for a drag free drift to the happenings of the fishery on the river. I've been out a few times and he has manged to make sure that I catch multiple fish each trip, even during the Snoopy rod derby with tons of boats and potato guns going off (not the typical trip).

The point is Jim is a great guide that knows all the local waters,shares his fishing knowledge, and imparts a little bit of wisdom on his clients.